Along with 13 other artists from around the world, I was invited by curator Virginia Spiegel to participate in Sightlines, a Studio Art Quilt Associates exhibition touring the USA from 2010 to 2014.

During a residency with the Royal Western Australian Historical Society, I was impressed by the collection of early survey maps and an 1832 herbarium of pressed wildflowers collected when the colony was barely established. The strangeness of the local flora must have emphasized the gulf between this very different “new land” and all that was comfortable and familiar.

Natural marks on the land were translated into descriptive markings and text on the survey maps. What appeared to unfamiliar eyes to be “indifferent land” actually provided abundant resources for those who lived there already. However, the addition of arbitrary lines dividing the land for settler allotments disrupted traditional patterns of use by the indigenous people. For both settlers and Aboriginals, the past became a fragile, disintegrating memory, as they patched together new lives in unfamiliar circumstances.

This story of history, place, and identity seemed best told using old fabrics bearing the marks of age and the imprint of rusty remnants of earlier times. Although drawn from very personal local history, it is nevertheless both universal and current. Dislocation, adaptation, and acceptance are issues faced not only by those who come to a new country but also by those already there. 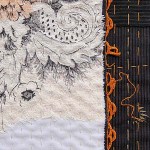 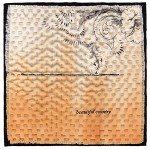 All content of this website is copyright.  You may copy any content for private use, but for any other use you must seek permission from Wendy Lugg.